La fantasía debe ser devuelta a la arquitectura
Other Titles:
Fantasy must be brought back into architecture
Authors:
Tostões, A. (Ana)

Keywords:
Arte
arquitectura
África
movimiento moderno
Art
Architecture
Africa
Modern Movement
Issue Date:
2017
Publisher:
Servicio de Publicaciones de la Universidad de Navarra
ISSN:
1138-5596
Citation:
Tostões, A. (Ana). "La fantasía debe ser devuelta a la arquitectura". Ra. Revista de Arquitectura. 19, 2017, 19 - 24
Abstract
El arquitecto luso-africano Pancho Guedes (1925), fue uno de los protagonistas principales de la revalorización de la arquitectura moderna en Mozambique (colonia portuguesa hasta su independencia en 1975). A través de sus escritos y su producción arquitectónica conectó diferentes disciplinas y culturas, estableciendo afinidades con diversos artistas como el pintor Malangatana Ngwenya (1936-2009). Su “fantástica y mágica arquitectura” es el resultado de la recepción de estímulos provenientes de una enorme red mundial de artistas y pensadores que recopiló de fuentes como: el propio Movimento Moderno, desde la Sudáfrica de Martiessen hasta el Brasil de Lucio Costa y Óscar Niemeyer; la contestación crítica a los CIAM por parte del Team 10, del cual fue fundador en el congreso de Royaumont junto con los Smithson, Aldo Van Eyck, Candilis y Giancarlo di Carlo; y, finalmente, un gran número de artistas africanos a los que impulsó.
Pancho Guedes (1925), the luso-african architect (Witwatersrand University, 1953) active in Mozambique, the former Portuguese colony till the independence in 1975, made in his writings and architectural production a major contribution to the reassessment of architectural modernity, connecting different disciplines and cultures and carrying out affinities with various creators namely with the painter Malangatana Ngwenya ( 1936-2009). His fantastic and magic architecture comes from the stimulus of a large worldwide network of artists and thinkers that he himself put up from different sources such as: the Modern Movement architects, namely the South African contributors as Martiessen or the Brazilian inspiring influence referred to Lúcio Costa and Oscar Niemeyer; Frank Lloyd Wright inspiring legacy or the CIAM’s critic contestation movement under the scope of Team 10 which he joined as founder member at CIAM’s Royaumont meeting together with the Smithson’s, Aldo Van Eyck, Candilis and Giancarlo di Carlo; or finally the new African artists which he promoted. Besides being one of Mozambique’s major architects, Pancho had the sagacity to detect talent, to promote creativity, having the ability to establish a network of creative, functioning himself as a sort of mediator between art and architecture. In Lourenço Marques ( currently Maputo) Pancho created a profound complicity with Malangatana, the surrealist painter, whom inventive spirit allowed no limits. Supernatural summoned, Malangatana stimulated Pancho in his will to “ ear the voices speaking from the other side of dream”. In The 50s, in an Africa of Apartheid between Mozambique, Rhodesia and South Africa, Pancho knew that there was the need to found an authentic and raw art, the art for authentic artists”5. Therefore he sought for an Architecture full of significance, carrying a personal dimension based on a research focused on all formal dimensions and on the possibility for architectonical elements to contain and express emotion: “ I claim for architects to have the same rights and freedom painters and poets have for so long”6. Pancho wanted to appropriate the primitive’s universal motifs, mixing them with his own sophisticated architectonical culture, in order to achieve in his buildings the ambience of Chirico’s painting. Pancho knew that Architecture is not perceived as an intellectual experience but as a sensation, an emotion7. Therefore he was interested in the quest for such quality “ long ago lost among architects but able to reach a spontaneous architecture capable of magic intensity”. In the 50s, this search resulted from the desire to create an alternative modernity, different from the mechanical international style growing also in Africa9. Unlike the majority of architects working in Africa forced to draw in dialogue to climate constrains, Pancho assumes the creator’s right to innocence stimulated by the sensuality and drama of the surrounding African culture. The creation and growth of Dori10 and Pancho African art collection, which has been recently exhibited in Lisbon, bears witness to his constant interest in the dialogue with other forms of expression. The objects he collected, as he himself has stated, helped him free himself “ from the dominant Eurocentric point of view of the white man who lives in the land of others”. The will to discover an alternative modernity was the answer to an inner appeal, but also to an Africa dawning to contemporaneity, to a new world which was in a state of ferment13. Pancho witness and acts in a time when Architecture is open to popular culture, when architecture without architects and architecture of fantasy are accepted14. But it is also the time for complexity and multiple solutions opened to the Modern Movement continuity or crises15, the ones Giedion identified as a result from reason and emotion related equation. Pancho gathered the conditions to follow an alternative, original and idiosyncratic path of his own. Besides his huge talent, wide culture, experimentalist and genuine curiosity, he had the term of living in Africa at the time: conditions he managed with cleverness. On one hand being apart from the Eurocentric European culture spreader, living in Africa in an European imperialistic peculiar colony17; on the other hand, living the period of colonial emancipation spreading throughout Africa, where, despite the imperialistic presence “ anything seemed possible”. As Pomar states Pancho “was one of the most inventive of the architects that were building in Africa, as well as one of the three or four recognised white mediators who sought out and promoted contemporary African art in various places on the continent. Lourenço Marques was, at the time ( in the early 1960s and before the surge of arrests that followed the start of the war for independence), a dynamic city and one of Africa’s cultural capitals, due, by and large, to Pancho’s international contacts in areas with quicker communicability with the outside world, such as architecture and the visual arts”.
URI:
https://hdl.handle.net/10171/56177
DOI:
10.15581/014.19.19-24
Appears in Collections:
REV - RA. Revista de Arquitectura - Vol. 19
Files in This Item: 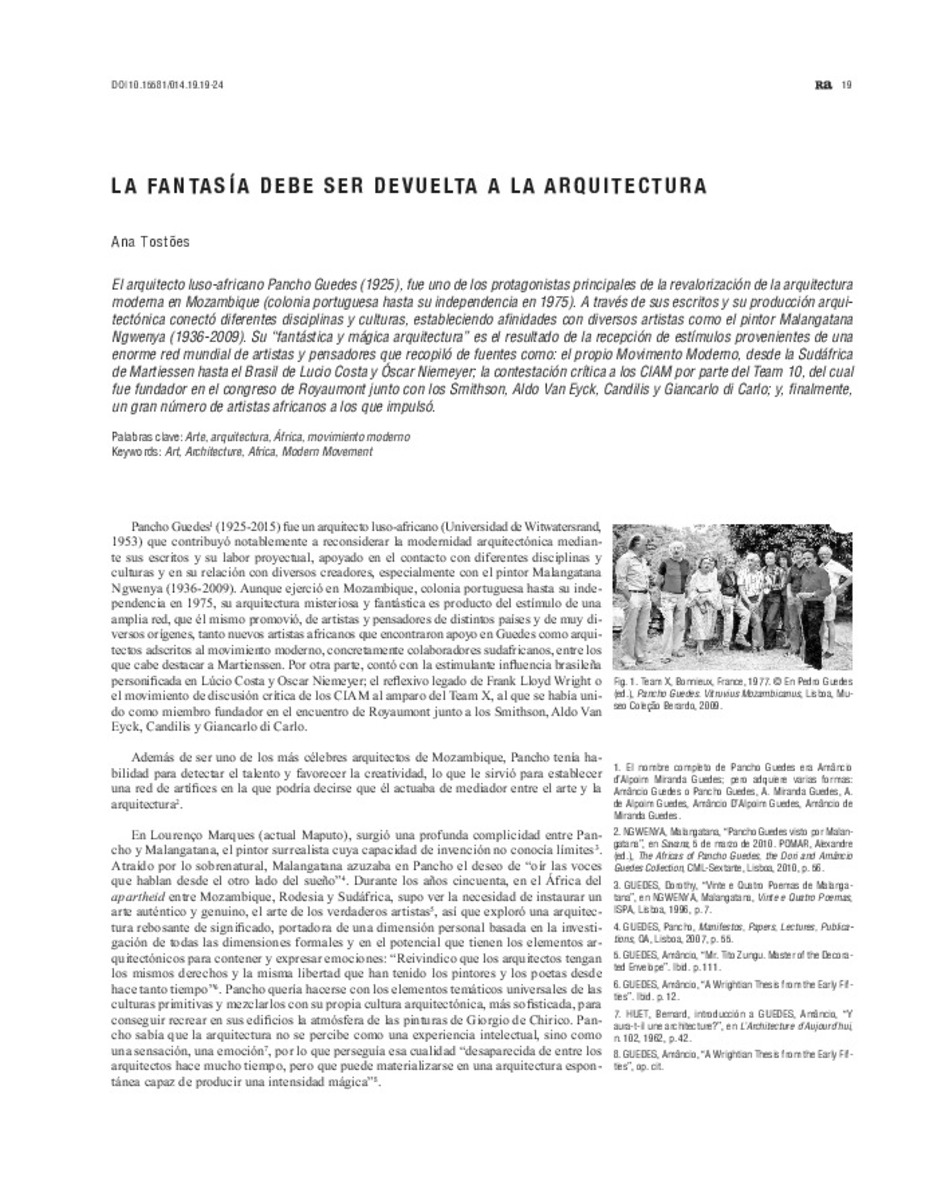