Keywords:
Materias Investigacion::Derecho
Issue Date:
1974
Publisher:
Servicio de Publicaciones de la Universidad de Navarra
ISSN:
0211-4526
Citation:
del Portillo, Álbaro. ""Moral y derecho"". Persona y Derecho, 1 (1974) : 495-502.
Abstract
Then manner in which the juridical order and the moral order are related between themselves is a question which continues to be debated even in our times. The cultivors of the moral sciences and of the Philosophy of Law, as well as those of Canon Law, dedicate arduous studies to this. The author, in brief annotations only, submits sorne points for an ulterior consideration, principally those which are related to Canon Law. l. Previous Questions: a) What is the moral order? Ordinarily, the moral order is identified with the relations which man observes under the orientation of laws and precepts related to God. It can be defined even better still as «the dimension of the order convenient to man as person»; that is, the sum of the exigencies which stem from the «ontological» structure of man as personal being. This definition or description provides us with many useful facts. b) What is Law? This generally indicates the social order or the order of the human community, inasmuch as it is composed and ordained organically, from whence the notes of .positivity» and «historicity» are deduced. Also, Canon Law is law or «social order» which governs the People of God and which, for the «community», has a temporal and historical dimensiono And, the communitary lite of its members, the same as its reciprocal relations, must be ordained according to the principies of Justice. 11. The Moral Foundation of the Narms af Lavv. The moral arder (of persons) and the juridical order (of communities, with respect to the social dimension of persons) must be distinguished, however, and must not be separated radically the one from the other, beca use both deal with persons. Law pre-establishes for itself a high «value», that is, Justice, in reason of its end; yet its rules can not ignore the arder of «persons». The juridical order will not be a complete reproduction of the norms of morality; even when it should be in consonance with the moral norm, the juridical norm will not urge always, nor will it urge in all the exigencies of the moral order. 111. Existing Nexuses betwe'en the Moral Order and Law. The first problem refers to the obligation which the human laws impose upon the moral conscience: the human society has roots -in the social condition of the human person, and therefore, fundamentally, in the will of the Creator- such that real obligations of responsibility and solidarity arise, whose weight is not yet determined in the ecclesiastical community, neither mechanically nor in a uniform manner, but they are known by the objective examination of the norms of Law and of its ends (often bearing in mind the rules for interpreting Law: think, for example, of .equity» and «epiqueía»). The author dedicates a particular and prudent investigation to the interpretation of the clause «gravitar onerata concientia» which is used in Canon Law. The second question is about the conflict which can arise between the dictates of one's own conscience and the human law (be it in itself, be it in its application to a certain concrete case). The general principie which imposes obedience in relation to the dictates of conscience is both known and clear. The third question is put by those who favour the new ideas about ecclesiastical law, and, aboye al!, its relation to personal conscience for which certain norms of Canon law (founded in the norms of morality) would barely have «ideal» or «indicative» value. Therefore, there would not yet exist obligatory juridical norms (that is, a real .law» would not exist). This thesis cannot be accepted. Ergo, the Christian community knows as its foundation the revealed message which promulgates the moral exigencies emanated from the institutional wil! of Christ. The observance of the moral norms is an essencial element of the «testimony» of the Church, whose juridical ordinances and social structures must respond to the moral message of the Christian Doctrine. Save for error -always possible- the law of the Church finds in the Christian message, legitimately transmitted, a criterion which obliges.
URI:
https://hdl.handle.net/10171/12165
DOI:
10.15581/011.32853
Appears in Collections:
REV - Persona y Derecho - Vol. 01 (1974)
Files in This Item: 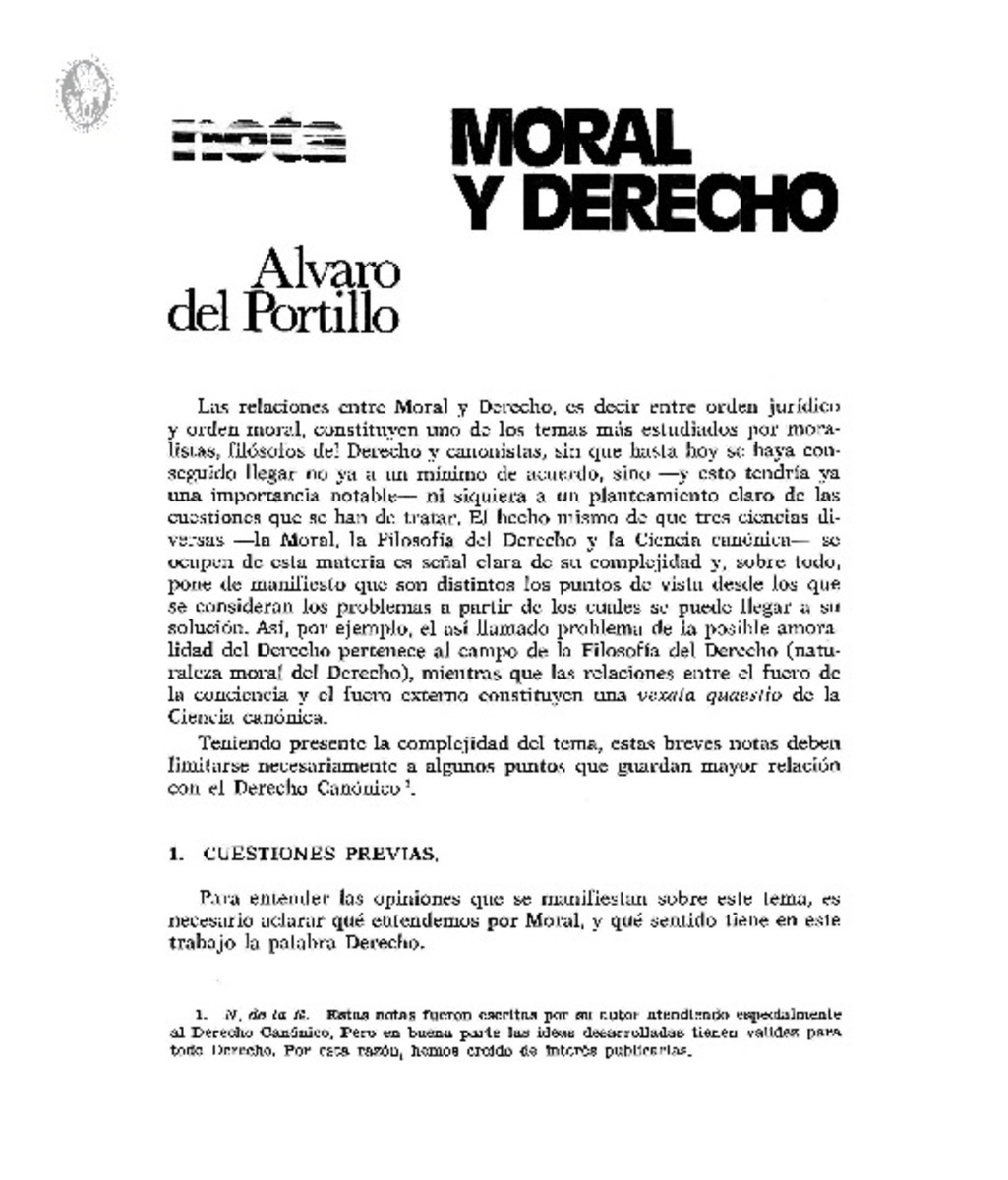