Keywords:
Materias Investigacion::Derecho
Issue Date:
1978
Publisher:
Servicio de Publicaciones de la Universidad de Navarra
ISSN:
0211-4526
Citation:
Malvar, Joaquim, Sarmiento, Augusto. ""Los términos ""bonum ordinis"" y la ""bonum moris"" y la noción de moralidad estudio en Santo Tomás"". Persona y Derecho, 5 (1978) : 439-538.
Abstract
This study constitutes a contribution to the metaphysical fundamentation of the moral order. The chapter dealing with «The Notion of Creation and the Metaphysical Situation of Created Beingo lays down the metaphysical basis for the study of the terms bonum ordinis -good of order- and bonum moris -moral good. The chapter on «The Causeof the Order in the Universeo offers the point of departure for passing away from the object of Metaphysics towards that of Morals. It is interesting to find out what constitutes the cause of the order found in the Universe and which can be captured in a first appreciation of reality as being multiple and ordained: a unit of order which calls for an investigation of its cause and a reduction of its real multiplicity to the unit level. From this, there derives the necessity of distinguishing between the predicamental and transcendental levels, and al so the introduction of the concept of participation and of its logical vision, the analogia entis. In this manner, we reach the problem of Being and of beings, of transcendental causality and of the presence of Being in the nature of beings -« The Founding Presence of Godo. From the fullness of perfection found in God as Pure Act of Being, we can deduce explicit notions of the being and manner of operating of God which are present in all posterior developments of the present work, for example, good of order, divine government, etc. By this way only is it possible for us to give the notion of morality a sound and sol id metaphysical basis. The chapter devoted to .God and the Created Universe» permits us to affirm that the formal constitutive element of morality is to be found in the ordaining or relating of human acts towards man's ultimate end. Now, morality is to be found to be metaphysical because of its formal object, insofar as it studies an aspect of the being as such, the good, which entails an ordination towards that end -«Being and Perfection»- which constitutes the bonum ordinis. For this reason, the passing from being as such to being as good, and of the ordo rerum to ordo ad bonum, has a real metaphysical basis. The ordo ad bonum is, as a consequence, ordinatio in Deum as a result of creation. The ordinatio in finem is a necessary relation found in creatures and in the divine creative action -given the free wll of God to create. It is based upon the esse and has for its subject the supposed subsistent. It is an esse a Deo and ad Deum, since the Final Cause is the very first of all causes. The Final Cause -the ultimate end- is the principie of all order, including the moral order. This is so because God gave their being to all creatures with order, according to the plan sketched out in His Divine Providence -eternal law- and conducts them towards their end through the execution of His plan -divine government- and wanted to count with the rational creature, making him partial to the eternal law and to the divine government in a different manner than that of irrational creatures. The moral natural law is that participation of the eternal law in man which can be known by way of natural reason and which can be wished by free will. In this manner, man participates in the divine government and is capable of governing himself as well as others, of carrying out the divine order wished by God, wanting what God Himself wants and in the same manner in which He wants it. He can give to the good of order a new dimension: the moral dimensiono The first basis, therefore, of the moral order is Godo The objective basis of morality is the ordaining of everything to Godo But its subjective basis is created freedom: thanks to it, man is capable of ordaining himself, on his own, to Godo The ordaining to God is a good, a participation in the eternal law which in man acquires a moral dimension, the moral goodo The moral order is the divine order found in the rational creatureo The moral law is universal, objective, immutable and inherent to man: it has been given to him in agreement with his own nature, with his proper mode of being -rational being- and his own mode of being ordained to Godo And, as a consequence, man's freedom is not the cause of his ordaining to God, nor its measure, but rather is created according to the eternal law of Godo To say that the constitutive element of morality is to be found in the good of order is to refer to to good of order in man, because the constitutive element or essence of morality is rather to be found in that relation, ordinance, or proportion of human acts with regard to the endo This relation towards the end -that is, towards God- is a necessary accident, consequent to the divine creative actiono In human acts, however, that accident is put forth as a determination of the operation, as an intention of the end, or as an identification with the plan of Godo In order for that to happen -for man to attain through his own acts the fullness of goodness to which he is ordained- integrity is necessary in the three principies which are present in the mora lit y of all human acts: the object, the end, and the circumstanceso
URI:
https://hdl.handle.net/10171/12340
Appears in Collections:
DA - Teología - Teología moral y espiritual - Artículos de Revista
REV - Persona y Derecho - Vol. 05 (1978)
Files in This Item: 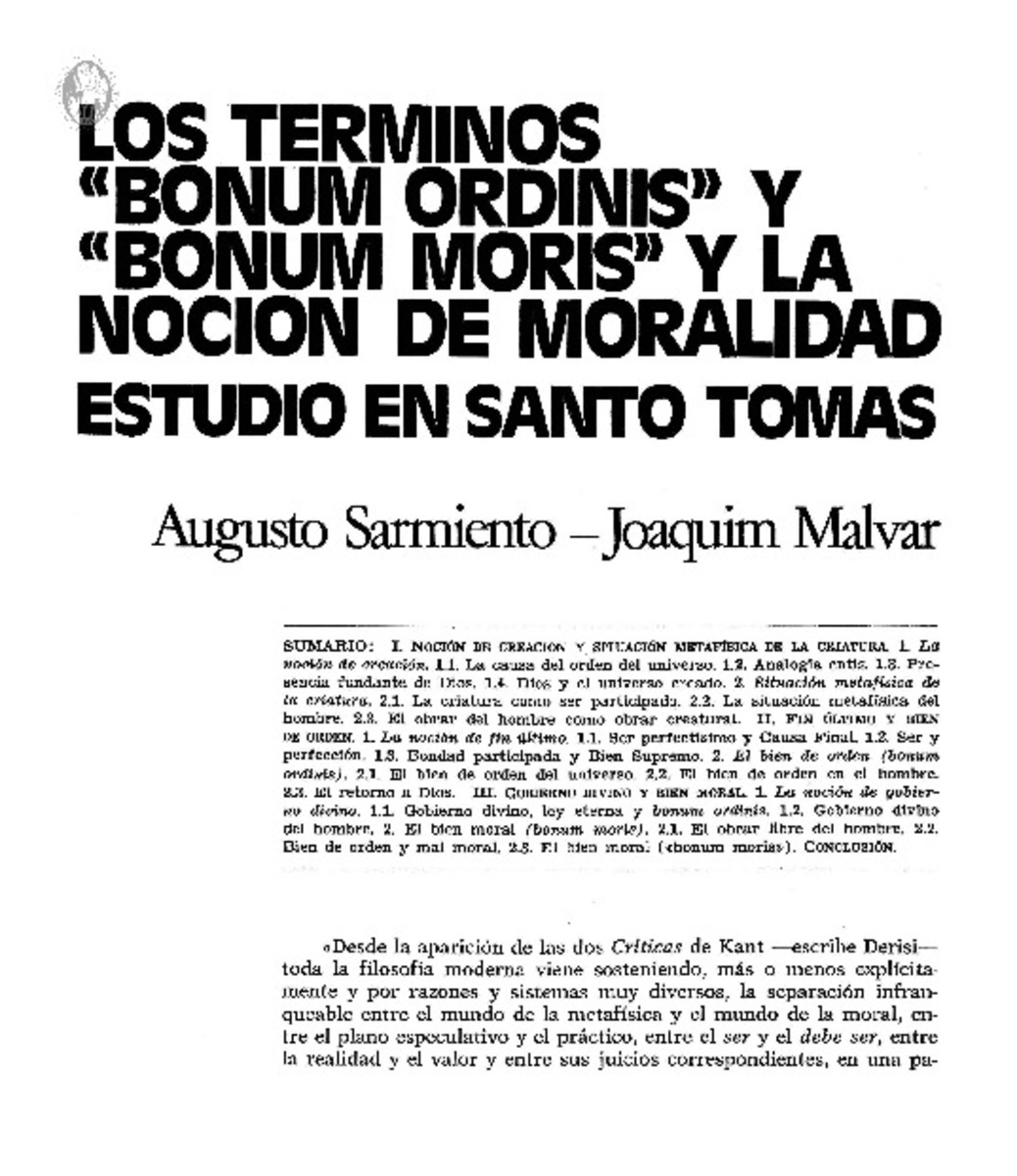