When the Style is the Message. The Aesthetics of Mood in 'Rectify' and 'Les Revenants'
Authors:
García-Martínez, A.N. (Alberto Nahum)

Keywords:
Television studies
Emotion
Mood
Issue Date:
2-Nov-2017
Citation:
García, Alberto N (2017). "When the Style is the Message. The Aesthetics of Mood in 'Rectify' and 'Les Revenants'". Paper presented at the "Aesthetics of Television Serials Conference", 2-4 November 2017, Universitat de València (Spain)
Abstract
Mood is an essential feature of cinema but theoretically overlooked in Cinema and Television Studies. Beyond the interest from some early cinema theorists such as Eisner or Bàlazs, recent Cognitive Media Theory has been the theoretical strand that has offered the most comprehensive study of mood within Screen Theory until date (Smith, Carroll, Plantinga). As Greg M. Smith points out, “the primary emotive effect” of cinema is “to create mood” (2003: 92), a difficult notion to grasp –nor exactly tone, neither atmosphere— that emotionally spills all over the narrative. Plantinga has defined mood as “the affective character that emerges from the combination of its elements” (463) and it is construed through narrative content, character action and mise-en-scène. According to Sinnerbrink, mood determines “how the particular film-world is aesthetically revealed and how we are affectively attuned to that world” (2012: 155). Following these authors, this papers aims to explore the distinctiveness of mood in serial television, examining, following Plantinga, the “amalgam of affective ‘charges’ or elicitors that together characterize the overall experience of the work” (461). We propose, therefore, a close analysis of both the pilot and the season finale of two heavily mood-oriented contemporary high-end TV Series: the French supernatural drama Les Revenants (Canal Plus, 2012-15) and the American indie emotional introspection Rectify (Sundance Channel, 2013-16). As Tarvainen et al. have written, “Aesthetic features combine to create a unified mood, which attunes the viewer affectively to the film and facilitates the cueing of emotions with stylistic devices” (2015: 2). Our analysis, then, intends to explore how these two critically acclaimed narratives build a mesmerizing, hypnotic, and contemplative mood which proves essential to “attune the viewer affectively”, that is, to generate its artistic success. As Plantinga explains, there are three mood elicitors in film: narrative emotion, cognitive dispositions and formal and stylistic qualities. We will focus our analysis on how the latter strongly creates the art mood from both Les Revenants and Rectify. Moreover, as far as extended narratives are so long, we will exemplify our analysis using audiovisual examples from the beginning and the end of both narratives, in order to test the consistency of the succession of moods that characterizes each of these two TV shows. We will concentrate our textual analysis in three elements: editing, music and close-ups. Firstly, we will examine the rhythm of each story. Both Les Revenants and Rectify use a slow-paced montage, filled with long shots and contemplative scenes. The whole narrative unfolds calmly and peacefully, creating an almost minimalist style where the reaction seems to be more relevant than the action of the characters. Secondly, we will examine how the soundtrack, drawing upon two very different kinds of music, favors an intimate and painful atmosphere in both TV Series. The unsettling score of Les Revenants, by Mogwai, aspire to elicit a sense of oddness and painful beauty. For its part, the Rectify soundtrack uses indie folk and pop songs that strengthen the mellowness of the narrative and the intimate journey into the soul of the damaged protagonist. Lastly, we will dissect the insistent use of close-ups in both TV shows. The close-up becomes a powerful stylistic tool (“scenes of empathy”, following Plantinga) to transfer into the audience the riveting mood—amazed, painful, poetic—that characterizes these two stories about loss, redemption and characters out of place.
URI:
https://hdl.handle.net/10171/52584
Appears in Collections:
DA - Comunicación - Proyectos Periodísticos - Comunicaciones a congresos
Files in This Item: 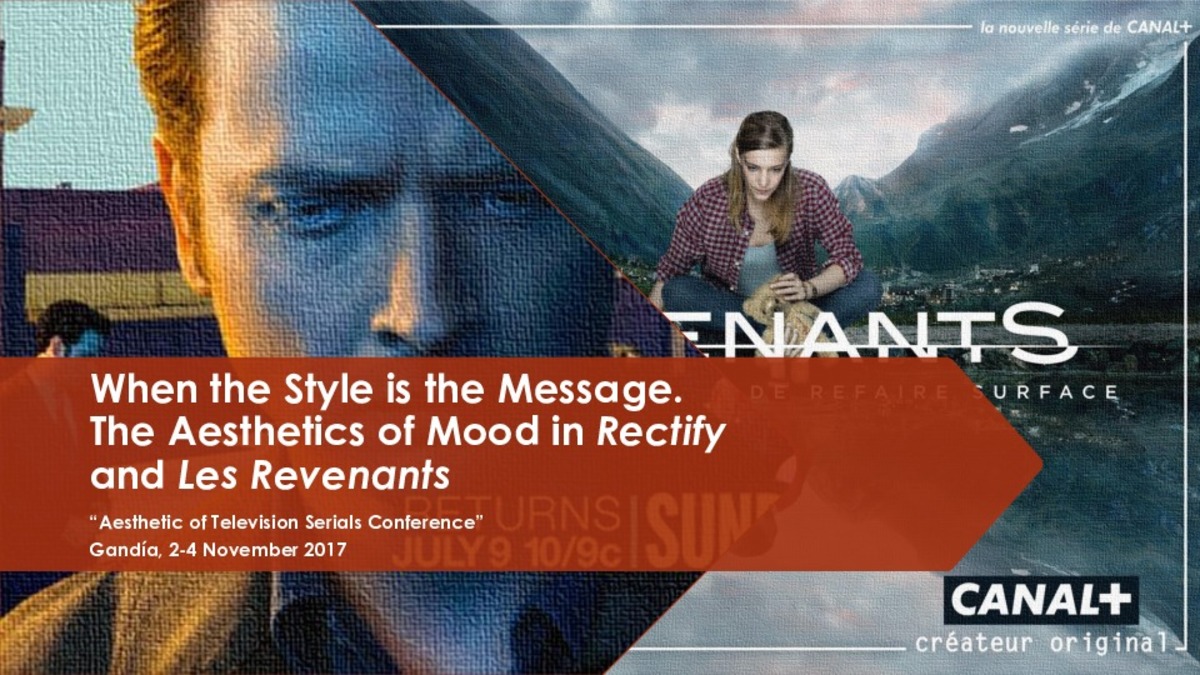