Keywords:
Materias Investigacion::Química::Química analítica
Espectroscopia de masas
Análisis cromatográfico
Issue Date:
1-Jul-2021
Defense Date:
26-Apr-2021
Publisher:
Universidad de Navarra
Citation:
ARCE LÓPEZ, Beatriz. “Estudio de la presencia de 19 micotoxinas en plasma humano: niveles en donantes sanos y enfermos en Navarra y la Rioja". González, E. y Lizarraga, E. (dirs.). Tesis doctoral. Universidad de Navarra, Pamplona, 2021.
Abstract
Mycotoxins pose a risk to food safety and, consequently, to human health. Exposure assessment of these toxins by human biomonitoring studies (HBM) based on the analysis of these compounds (mycotoxins and their metabolites) in biological samples appears as a promising alternative to the current employed approach: the study of mycotoxin levels in different food matrices. In the present study, the state-of-the-art of HBM has been first reviewed and some challenges to be faced have been identified. Subsequently, an analytical LC-MS/MS (QqQ) method has been developed and validated for the determination of 19 mycotoxins and their metabolites (aflatoxins B1 (AFB1), B2 (AFB2), G1 (AFG1), G2 (AFG2), M1 (AFM1), ochratoxins A (OTA) and B (OTB), zearalenone (ZEA), sterigmatocystin (STER), deoxynivalenol (DON), deepoxynivalenol (DOM-1), 3-acetyldeoxynivalenol (3-ADON), 15-acetyldeoxynivalenol (15-ADON), nivalenol (NIV), toxins T-2 (T-2) and HT-2 (HT-2), neosolaniol (NEO), diacetoxyscirpenol (DAS) and fusarenon-X (FUS- X)) in human plasma samples. Captiva EMR-Lipid® cartridges were used for the sample clean-up process. Good values of selectivity, linearity, accuracy, precision, stability, recovery and matrix effect were obtained. With this methodology, a total of 610 samples were analysed, distributed as follows: 438 samples from healthy adults (19-68 years), 79 from healthy children and with digestive or behavioural pathologies (attention deficit hyperactivity (ADHD) and autism spectrum disorders (ASD)) (2-16 years) and 93 from healthy adults and with neurodegenerative pathologies (Parkinson¿s and Alzheimer¿s diseases) (44-85 years) were analysed before and after an enzymatic treatment with β-glucuronidase/arylsulfatase (to detect possible conjugates of the mycotoxins studied). OTA proved to be the most prevalent mycotoxin in all the studied samples. Moreover, there is a percentage of individuals in all groups with higher levels of this compound after enzymatic hydrolysis, which would indicate the presence of conjugates of this mycotoxin. The different behaviour after enzymatic hydrolysis could indicate differences in the metabolism of OTA between samples from healthy and sick donors. The occurrence of OTB in a percentage of samples, and always associated with OTA, suggests that it may be a metabolite of OTA. STER, a less studied mycotoxin and whose metabolism route is unknown, appears only after enzymatic hydrolysis with a high incidence in all groups. This supports glucuronidation as a pathway of metabolism of this mycotoxin in humans. Despite the regulations applied in our country on the maximum levels of some mycotoxins in food, exposure to OTA and STER has been observed. The levels found could pose a danger to individuals, especially children, with a longer life expectancy and a less varied diet. In addition, differences in incidence and levels have been found in healthy and sick individuals, both in adults and children. The reason for these differences still remains unknown, but it would be of interest to elucidate whether or not exposure to these environmental toxicants has an influence on the development of these diseases, or if the differences are due to the existence of the disease.
URI:
https://hdl.handle.net/10171/60980
Appears in Collections:
DA - Farmacia y Nutrición - Tesis doctorales
Facultad de Farmacia y Nutrición - Tesis Doctorales y Tesinas - 2020-2029
Files in This Item: 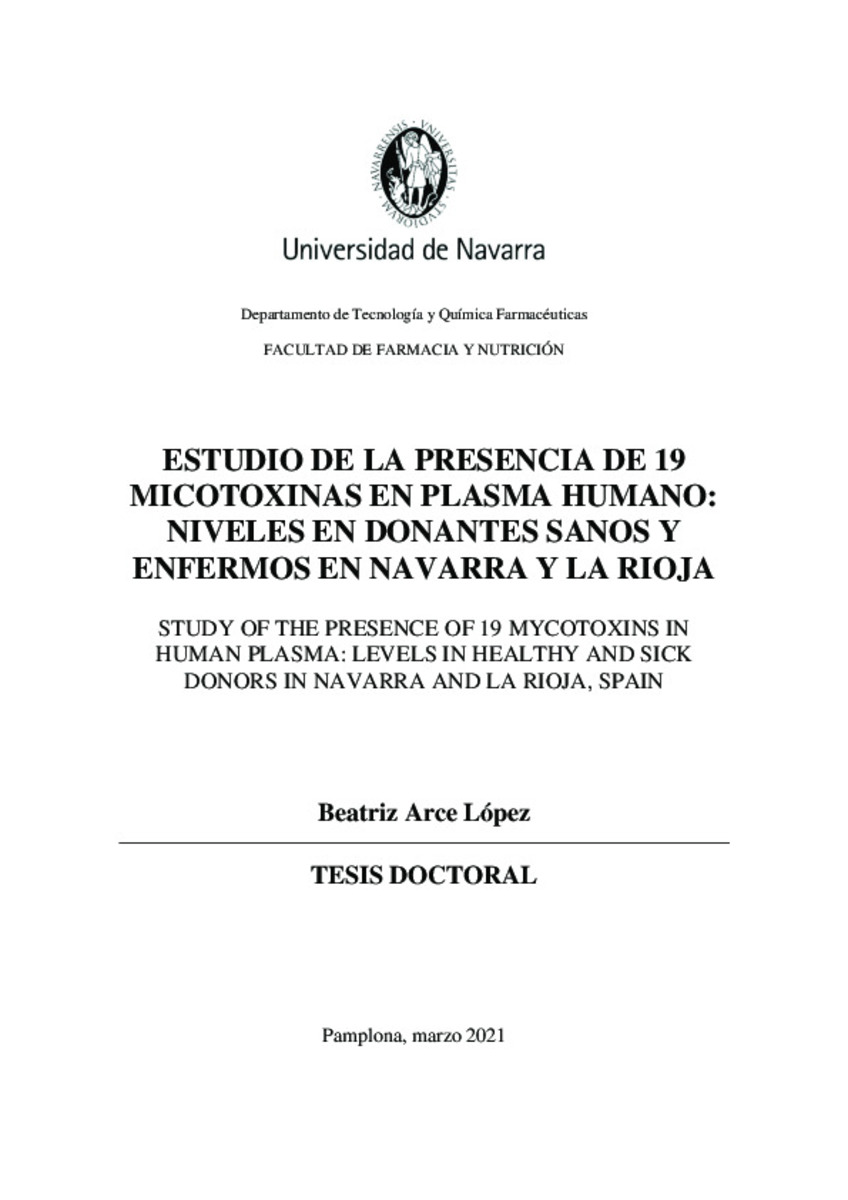